The rusty-patched bumble bee recently became the first kind of bee to be added to the endangered species list. 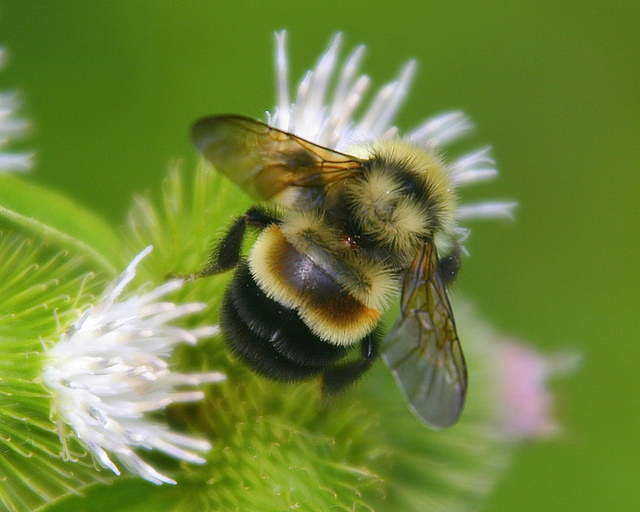 This bee used to range widely, from Minnesota to Maine, and as far south as Georgia. Now, it’s only found in isolated pockets.

One of those pockets is in Madison, Wisconsin. The Arboretum reports that they still have rusty-patched bumble bees, though many fewer than in the past.

The fact that there are still some left, though, means that residents of Madison can help the bees, allowing them to increase their numbers and begin to spread back into areas where they used to be found.

Unlike some bees, which rely on specific kinds of flowers, bumble bees can gather food from many different plants. Adding plants to your yard that flower throughout the season, and avoiding the use of pesticides, can help bumble bees. Rusty-patched bumble bees also need a little bit of bare soil in which to build their underground nests and lay their eggs.

Bumble bees are different from honey bees, which are a non-native, domestic species. Many well-intentioned people who are worried about pollinators try to help by taking up beekeeping. As some have put it, being concerned about pollinator decline and putting a beehive in your yard is like trying to address declining bird populations by getting some chickens. Adding more hives of honey bees to an area can actually decrease the quality of the local habitat for native bumble bees, because it increases competition for the resources that bees need.

“A Ghost in the Making” is a short documentary about the rusty-patched bumble bee. A segment in the middle of the film focuses on Madison’s Arboretum.